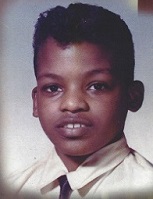 The Foreign Missions is dedicated in Loving memory of Allan Bryant born December 10, 1953, he was a good baby, and around the age of two he acquired a love for the outdoors and would joyfully play in the yard. We could always tell where he was by listening for his playful sounds.

As a toddler, he loved to follow his father around everywhere he went. He also loved school and sports, especially track. When his sister, Ruth, was old enough to follow him around, they played their favorite game of cowboys and Indians. Allan always wanted to be the cowboy because he didn't like losing. Romping and play in the woods near the home was their favorite pastime.
He gave and received much love from everyone in the neighborhood, children and neighbors alike. Because of the life he lived, he became an inspiration in the lives of almost everyone he met. He was always there to keep the peace when little spats arose among his playmates.

At the age of eleven, Allan received the baptism of the Holy Ghost and he longed to know more and more about Jesus and heaven. Following a bicycle accident, Allan, at the age of eleven and a half was called home many as 16 of his little playmates received the heavenly gift of the Holy Ghost. Yes, they too opened their hearts to the same Jesus that our Allen had come to love so much.

CHALLENGES, TRAGEDY, REBIRTH In 1964, tragedy would strike. Bishop and Sissieretta’s young son Allan, at age eleven would go to Lord as the result of an accident. No greater pain could be imagined. But the Bishop and his wife and other children used the healing power of the Lord to gain understanding in knowing that little Allan’s journey had only ended on earth and would now continue in the heaven in which he most deeply believed. Then in 1969, settled in the original Morris Ave., Bronx, NY headquarters, this church would be consumed by fire. Again, The Bryants were asked to call upon the power of the Lord for strength and re-dedication to acquire a new church — and in just a year — nearby on Morris Ave. All great blessings come to those who give out great blessings. And so it is with Bishop Bryant. His strength has brought this great institution to our community and to other parts of the world as it continue to endure today.